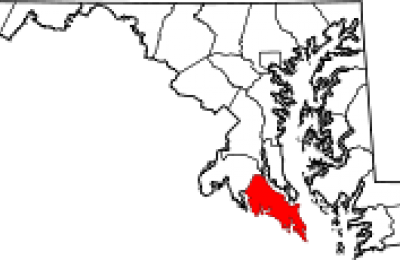 
Map highlighting Saint Mary's County within Maryland. Image: Dbenbenn.
In the shooting incident at GMHS on March 20, according to St. Mary's County Sheriff's Office, Austin Wyatt Rollins, a student at the school, opened fire with a Glock pistol at 7:57&#160;AM local time (1157 UTC); he shot 16-year-old Jaelynn Willey in the head and also wounded another student, identified as 14-year-old Desmond Barnes, with a single shot. Deputy First Class Blaine Gaskill, assigned to the school as a school resource officer, confronted Rollins within three minutes of the first shot. Gaskill fired at Rollins, striking his handgun just as Rollins shot himself in the head. Rollins died later at hospital.

In one of the recordings released, Desmond Barnes made a report to the emergency line, "I was just shot in my school." The dispatcher replied, "I'm sorry?" and Barnes repeated, "I was just shot at my school." The dispatcher then asked, "What school are you at?" and an unidentified female voice interjected, "We're at Great Mills High School. Were you shot sweetie?" to which Barnes responded, "Yes." Barnes was released from hospital on March 21.

Jaelynn Willey initially survived her head wound. However, after two days on life support, her parents held a news conference announcing she was brain dead and they chose to discontinue her life support. Willey was declared dead late on the night of March 22.

The sheriff's investigators said Willey and Rollins had been in "a prior relationship which recently ended" and she was not a randomly selected victim.


Logo. Image: March For Our Lives.
On Saturday, students from GMHS joined a wider demonstration in the United States called the "March for Our Lives" which was primarily inspired by February's Stoneman Douglas High School shooting in Florida.

Students, alumni and teachers from GMHS traveled north to Washington, D.C. to be a part of the march. Kayla Wells, a senior student, said when speaking to Time magazine, "It shouldn't happen again. It shouldn't happen to anyone[...] How did we become so desensitized to shootings happening?"

Marianne Beaulieu, who has been suffering from anxiety since the shooting, said to The Baltimore Sun, "I feel like I'm helping to make a change[...] We need to make Jaelynn's death the last gun violence death in our schools ever."

"I think our group consisted of about 250 people," alumnus and organizer Emerson Schaeffer told WTTG television regarding the GMHS numbers in Washington.

"We will march for you, Jaelynn Willey. We will march for all the students of Great Mills who will forever be traumatized because of what happened on Tuesday” tweeted Jaclyn Corin, a student at Marjory Stoneman Douglas High School.

Back in Great Mills, a coastal town in Saint Mary's County about 65 miles (105 kilometers) from the United States capital, there was a gathering on Sunday in remembrance of Jaelynn Willey.

Astronomer tells Wikinews about discovery of ...

Friday, May 22, 2020  Artistic impression showing the orbits of the triplet of the HR 6...
Send us your articles and web-novels! comments powered by Disqus

A woman in Spain has been fined €800 after posting a photograph to her Facebook account of a...

Via press release on Friday, Andy Martin, a perennial candidate for political office and sel...

Kezia Dugdale MSP (Member of Scottish Parliament) has been elected as the new leader for Sco...

Malaysia: 'Most' debris found on Maldives islands no...

On Tuesday, the team of Malaysian investigators arrived in Maldives to take charge of the de...