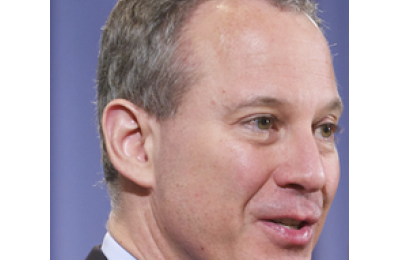 Eric Schneiderman, from file, 2012. Image: Lonnie Tague, United States Department of Justice.
Maria Contreras Sweet, from file, 2014. Image: Small Business Administration.
Harvey Weinstein, from file, 2011. Image: David Shankbone.
On Thursday in a meeting at New York Attorney General Eric Schneiderman's office, Maria Contreras-Sweet Group, billionaire Ron Burkle, and a number of other investors acquired assets of The Weinstein Company for reportedly about US$500 million. The Weinstein Company had financial difficulties and was nearly bankrupt after Harvey Weinstein was accused of sexual misconduct by dozens of women last year, which impacted the business budget.

At least two of The Weinstein Company board of directors &#8212; consisting of Tarak Ben Ammar, Lance Maerov and Bob Weinstein &#8212; participated in the meeting, according to The New York Times. Maria Contreras-Sweet Group was represented by Maria Contreras-Sweet and Ron Burkle. The New York Attorney General Eric T. Schneiderman was also in the meeting.

The agreement required Maria Contreras-Sweet Group to protect the jobs of company employees, and establish a victim compensation fund which would compensate victims of Harvey Weinstein's alleged sexual misconduct while not rewarding the "bad actors", as Schneiderman put it &#8212; people who had contributed to the sexual misconduct. The victim compensation fund would allegedly be around US$90 million, according to reports.

New York Attorney General Eric Schneiderman filed a lawsuit against The Weinstein Company in early February of this year. He reportly indicated he might settle the lawsuit after the deal is finalized.

Maria Contreras-Sweet Group said they would use the assets in creating a new movie studio with a majority-female leadership.

The Weinstein Company said on Monday, three days before the deal announcement, it intended to file for bankruptcy as it could not find a buyer that would keep it afloat until the deal would be finalized.

The Weinstein Company was founded in 2005.

Meet Didga, a feline with a taste of life in the fast lane; happily cruising around Coolanga...