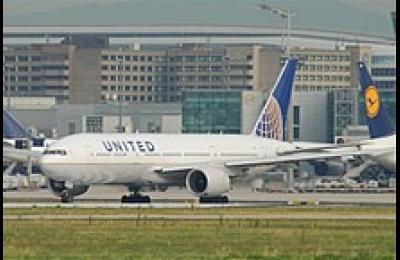 The Boeing 777-200 two-engine jet left San Francisco International Airport shortly after 9:00&#160;am PST (1700 UTC) and was flying the scheduled United Flight 1175 when there was a sound described by one passenger, Maria Falaschi, as "a big bang". Pieces of the right-side engine assembly could be seen blowing in the wind. Passengers said the plane landed 40 or 45 minutes later, during which time they said it shook "violently", "sound[ing] a lot like being inside an unbalanced washing machine" as one posted to Instagram. Many took pictures and videos; one later told ABC News: "I thought we were going to die and hoped that my kids knew that I loved them". She said the flight attendants also appeared afraid. Falaschi said it was the "scariest flight of my life".

The plane landed at 2:42 pm PST; there were no reported injuries. United issued a statement saying the engine cowling had come off because of a "mechanical issue" and that passengers had "deplaned normally" after "pilots followed all necessary protocols to safely land the aircraft" and "taxied to the gate". The statement also said the company would be contacting all the passengers and "plan to fully refund every ticket".

The devil baby terrifies the people of New York

New Yorkers were terrified as a remote controlled pushchair roamed around unattended and whe...

Jordan yesterday ended a moratorium on executions that had stood since 2006, executing eleve...

Typhoon Koppu, known additionally as Lando, made landfall in the northern Philippines on Sun...

Justin Bieber was arrested and detained at 04:09 ET on Thursday morning after being caught d...