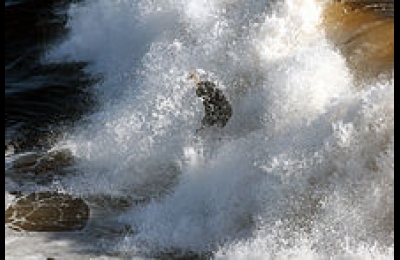 The epidemiological study was nicknamed the "Beach Bum Survey". The project recruited 143 regular surfers, body surfers and bodyboarders from around the United Kingdom. Each was asked to recruit a non-surfing friend of the same sex and approximate age and who lived in the same part of the country to serve as a control, which resulted in a control group of 130.

All participants mailed in rectal swabs, and the researchers cultured the E. coli from those samples with a common antibiotic called cefotaxime. The antibiotic failed to kill the bacteria in about 9% (13 out of 143) of surfer and bodyboarder samples and 3% of the samples from the control group (4 out of 130). A deeper look into the genomes of the specific strains of bacteria found in the study volunteers showed that bacteria from surfers were four times as likely to possess genes that can be transferred from one bacterial strain to another, which can help antibiotic-susceptible bacteria become resistant. The study also involved examination of water samples from the coasts of England and Wales to estimate the risk of surfers and other beachgoers ingesting E. coli.

E. coli is a regular resident in the guts of humans and other animals. Most strains are harmless but others can cause serious disease. Like other bacteria, E. coli can undergo horizontal gene transfer, swapping genes from one bacterium to another. This can give the altered strain the ability to cause disease, survive in the presence of antibiotics or both.

Although, the researchers expressed concern surfers might spread dangerous bacteria, Dr. Will Gaze, the University of Exeter Medical School professional who supervised the project, urged people not to avoid the beach: "We are not seeking to discourage people from spending time in the sea, an activity which has a lot of benefits in terms of exercise, well-being and connecting with nature", he said. "It is important that people understand the risks involved so that they can make informed decisions about their bathing and sporting habits. We now hope that our results will help policy-makers, beach managers, and water companies to make evidence-based decisions to improve water quality even further for the benefit of public health."


David Smith, science and policy officer of Surfers Against Sewage, which helped organise the volunteers, agreed the study was not meant to discourage surfing: "Water quality in the UK has improved vastly in the past 30 years and is some of the cleanest in Europe. Recognising coastal waters as a pathway for antibiotic resistance can allow policy makers to make changes to protect water users and the wider public from the threat of antibiotic resistance."

One of the principal findings of this work was that existing methods may have been underestimating the prevalence of these bacteria in seawater. Previous studies have shown that even designated swimming beaches can be affected by runoff from farms or even sewage, and surfers swallow roughly ten times as much seawater as swimmers. Professor Colin Gardner of the charity Antibiotic Research UK says, these forms of runoff can have even higher concentrations of antibiotics than patients undergoing antibiotic treatment. "Research into new medicines to replace our archaic antibiotics has stagnated and unless new treatments are found, this could be potentially devastating for human health", he warns.

The World Health Organization has reported that because so many kinds of bacteria are gaining resistance to common medicines, conditions such as pneumonia and gonnorhea may become more difficult to treat and have higher rates of sickness and death. Doctors often prescribe preventative antibiotics to patients undergoing surgery or radiation therapy, and this may also be impacted. Professor Sally Davies, England's chief medical officer, has described a "post-antibiotic apocalypse" scenario

British actor Bob Hoskins died on Tuesday, April 29 in the hospital after succumbing to pne...
Send us your articles and web-novels! comments powered by Disqus

The epidemiological study was nicknamed the "Beach Bum Survey". The project recruited 143 re...

A crowd of over 10,000 people attended the dawn service on Saturday at Gallipoli, Turkey for...