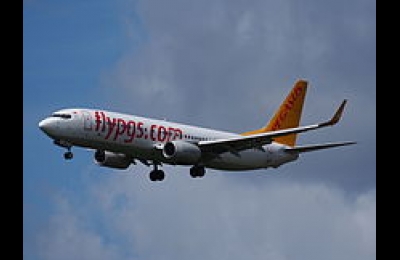 Saturday afternoon, a commercial aircraft skidded off the runway at Trabzon Airport in Turkey. The airplane, which carried over 160 passengers and crew, had just landed when it left the runway and went down a cliff, where it stopped, perilously close to the Black Sea. The aircraft is a Boeing 737-800 operated by Pegasus Airlines.

Trabzon Airport with the Black Sea in background.
Image: Aleksasfi.


Provincial governor Yucel Yavuz told the press, everyone was evacuated and no injuries were reported. He announced the airport would be closed until Sunday morning as investigators take a look at the incident. It is unclear why the plane veered off the runway. Photos show the nose of the craft mere meters from the sea on the steep cliff.

Passenger Yuksel Gordu told Anadolu Agency: "It's a miracle we escaped. We could have burned, exploded, flown into the sea." Fellow passenger Fatma Gordu said: "We tilted to the side. The front was down while the plane's rear was up. There was panic, people shouting, screaming."

China Eastern jet with 132 onboard crashes in...

This article is breaking news, and may change rapidly as new information becomes available....

Airplane crashes into ocean in Micronesia

Transport Related articles 29 September 2018: Airplane crashes into ocean in Micronesia ...
Send us your articles and web-novels! comments powered by Disqus

Windows: Are you running out of hard-drive space?

One of the biggest problems of today is hard-drive storage, you can buy yourself a 1 terabyt...