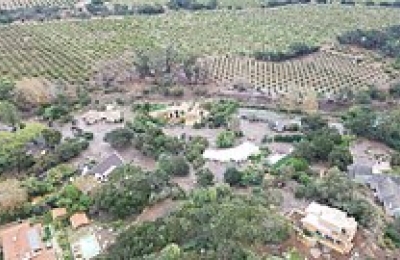 On Tuesday, the first major rain storm of the year in Southern California led to flooding that has caused at least fifteen deaths, mainly in Santa Barbara County. The flooding was exacerbated by last month's wildfires; particularly hard-hit was the wealthy community of Montecito, downstream of the site of the Thomas Fire, where at least six houses were destroyed. More than 160 people have been hospitalized, four in critical condition.

According to the United States National Weather Service, five and a half inches of rain has fallen over two days in parts of Ventura County, and more than four inches in parts of Santa Barbara County. In areas burned by the wildfires, ground cover that would have reduced runoff had been destroyed, and an impermeable layer of ash and burned soil had been created. As a result, torrents of mud ran downhill and inundated places such as Montecito. Mike Eliason, a spokesman for the Santa Barbara County Fire Department, said homes in the wealthy community had been "wiped away from their foundations" by mudflows, which also burst a gas main, leading to a fire that destroyed another building.

Sections of the 101 freeway were closed by flooding; a driver told television station KTLA that mud came "out of nowhere" and covered the highway in "about five seconds" and that he was glad he was still alive. James Cook, the Los Angeles correspondent for BBC News, reported that roads were being blocked by "boulders the size of small cars" which had tumbled down the hills. BBC also reported, 300 people had been trapped in Romero Canyon. Bill Brown, the Sheriff of Santa Barbara County, said at mid-afternoon that the number of deaths had reached thirteen and might rise. He described the flood-ravaged areas as looking "like a World War I battlefield" and said that emergency dispatchers had fielded some 600 calls between 3:00 and 6:00 am.


Video of a family being rescued by helicopter.
Video: United States Coast Guard.


Emergency services including the Ventura County Aviation Unit were kept busy rescuing people. The Coast Guard sent aircraft to assist. Spokesmen reported fifty people had been rescued in each of Los Angeles and Santa Barbara Counties. Montecito resident, Berkeley Johnson, told the Santa Barbara Independent that he and his wife had taken refuge on the roof of their house but climbed came down when they heard a child crying. With a fireman's help were able to dig out a two-year-old girl, who looked like a "muddy doll" according to Johnson.

Officials issued evacuation orders on Monday for thousands of people living in Santa Barbara, Los Angeles, and Ventura counties, but Montecito was under only voluntary evacuation. Some of the evacuation orders were lifted later on Tuesday as the rain became lighter.

Sunday, May 20, 2018  United States Related articles 20 May 2018: Hawaii's Kīlauea volca...
Send us your articles and web-novels! comments powered by Disqus

"Each Polish family must feel safe", Szydło said. "It is the duty of the Polish state, the g...

Meet Didga, a feline with a taste of life in the fast lane; happily cruising around Coolanga...