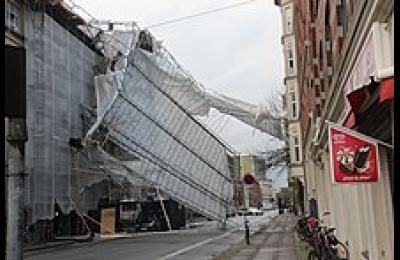 In Copenhagen, Denmark on Monday, the first day in the new year, scaffolding at the corner of Randersgade and Koldinggade collapsed at about 13:00 local time (1200 UTC). Strong winds were reported.

Police cordoned off the area, noting it could collapse even more and cables for the street lightning were broken.

No personal injuries were reported, but some cars were damaged, according to the Copenhagen Police.

Arbejdstilsynet, the Danish workplace safety authority, was investigating the cause of the collapse and the police planned to question the company who set up the scaffolding.

In Copenhagen, Denmark on Monday, the first day in the new year, scaffolding at the corner o...