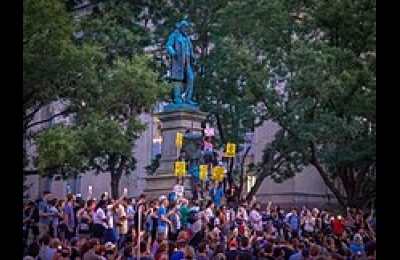 The "Unite the Right" rally began on Friday. It drew such groups as the Ku Klux Klan (KKK) and neo-Nazis and well-known "alt-right" personalities like David Duke and Richard Spencer. They shouted slogans such as "You will never replace us" and "Jews will never replace us" and waved Confederate flags. Counter-protesters including members of Black Lives Matter and antifa — a U.S. anti-fascist movement — gathered in the hundreds. The two sides clashed near Emancipation Park, where the statue stands. The demonstration devolved into physical fights, and Virginia Governor Terry McAuliffe declared a state of emergency and called in the National Guard to remove the protesters.

By varying reports, after the alt-right protesters were removed from the park, a Dodge Challenger drove toward a group of counter-protesters near Fourth Street. In one version of the story, the Challenger drove directly into the crowd, killing Heyer, injuring at least nineteen, and throwing at least two people through the air. In another account, the Challenger hit a sedan from behind, which in turn hit a minivan, and it was these two vehicles that actually made contact with the counter-protesters. The incident is to be investigated by the Federal Bureau of Investigation, the United States attorney for the Western District of Virginia, and the Civil Rights Division of the U.S. Department of Justice. Authorities have not yet disclosed whether Fields was driving.


It was probably the scariest thing I've ever seen in my life [...] it was pandemonium. The car hit reverse and sped and everybody who was up the street in my direction started running.


Podcaster Robert Armengol, who was present, told the press, "It was probably the scariest thing I've ever seen in my life[...] After that it was pandemonium. The car hit reverse and sped and everybody who was up the street in my direction started running."

On Monday morning, fields appeared in court via video from lockup, and Judge Robert Downer denied bail. He is charged with one count of second-degree murder, three of malicious wounding, and one of hit-and-run. The judge appointed a lawyer for Fields.

Fields lived in Kentucky with his mother until a few months ago, when he moved to Ohio for work. An uncle of Fields told the Washington Post a drunk driver killed Fields's father before Fields was born, leaving him money in a trust until he turned eighteen. His high school history teacher Derek Weimer told the press that Fields had been a quiet, intelligent student. Fields tried to join the army but, according to Weimer, was rejected because of an antipsychotic medication prescription, though The Guardian noted military records suggesting Fields served for a few months in 2015. His Facebook page, which has since been deleted, once held Nazi imagery and a picture of Hitler. On the day of the rally, Fields was photographed protesting with the neo-Nazi group Vanguard America and holding their insignia.

Fields' mother, Samantha Bloom, told various news media she had thought her son was at a general Donald Trump rally. She commented he "had an African American friend" and said she was surprised to hear that Fields was involved with white supremacism.

Other fatalities associated with the weekend's unrest include Virginia State Police troopers Lieutenant H. Jay Cullen and Berke M.M. Bates, whose helicopter crashed while they were investigating the riots.

U.S. President Donald Trump commented, "We condemn in the strongest possible terms this egregious display of hatred, bigotry and violence on many sides, on many sides," saying that things like this have "been going on for a long long time" and called for "swift restoration of law and order." He subsequently received criticism from members both major U.S. political parties for not calling out the white supremacists specifically. During his presidential campaign, David Duke associated with the KKK endorsed Donald Trump, which Trump did not reject.

Orrin Hatch of Utah, the longest-serving Republican in the Senate, was one of many from both political parties who criticized President Trump for not calling out the white supremacists specifically, saying via Twitter, "We should call evil by its name. My brother didn't give his life fighting Hitler for Nazi ideas to go unchallenged here at home." Similar sentiments were published by former presidential candidate Senator Marco Rubio and New Jersey Governor Chris Christie. Several, including Senators Rubio, Cory Gardner, and Ted Cruz referred to the event as domestic terrorism.


My brother didn't give his life fighting Hitler for Nazi ideas to go unchallenged here at home.


A proposal about a year and a half ago to remove the statue of Robert E. Lee sparked considerable controversy. Advocates of the statue portrayed it as history and opponents as a celebration of white supremacy. A few months ago, the Charlottesville City Council voted to remove and sell the statue, but a lawsuit was filed to prevent it. The statue remains in the park while these matters are resolved.

Robert E. Lee was a major figure in the American Civil War, in which eleven of the slaveholding southeastern states including Lee's home state, Virginia, attempted to secede from the rest of the country in the culmination of the decades-long debate about slavery. Lee began his career as a United States military officer. He trained at the West Point Military Academy and served in the Mexican-American War before joining the Confederacy at the beginning of the U.S. Civil War in 1861. Officially, he was General of the Army of Northern Virginia.

After surrendering to Union General Ulysses S. Grant, Lee lived quietly as president of Washington College, now called Washington and Lee University. After his death, white Southerners wishing to romanticize the antebellum South and the "Lost Cause" of the Civil War adopted Lee as their hero.

Lee repeatedly and publicly opposed the construction of Confederate war memorials: "I think it wiser moreover not to keep open the sores of war, but to follow the examples of those nations who endeavoured to obliterate the marks of civil strife and to commit to oblivion the feelings it engendered." Instead, he encouraged other Southerners to focus on the future. According to the Southern Poverty Law Center, about 700 statues of Lee and other Confederate monuments stand in Southern towns and cities.

Trump says he may put US into state of emerge...

United States Related articles January 7, 2019: Trump says he may put US into state of em...
Send us your articles and web-novels! comments powered by Disqus

The "Unite the Right" rally began on Friday. It drew such groups as the Ku Klux Klan (KKK) a...

Star Wars cast, what they look like NOW! (GALLERY)

We have put together a gallery of celebs from the Star Wars movies; are you curious about ho...

The following is the third edition of a monthly series chronicling the U.S. 2016 presidentia...