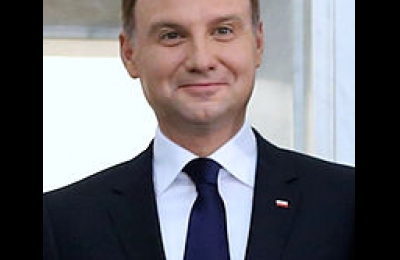 "I have decided to send back to parliament — in which case to veto — the law on the supreme court, as well as the law on the National Council of the Judiciary." These laws "would not strengthen the sense of justice in society," Duda told the public. He said he made this decision after extensive consultation with experts in a variety of areas, including legal experts, and particularly anti-communist activist Zofia Romaszewska.

Specifically, the law would require every one of Poland's more than 80 Supreme Court justices resign and would empower the justice minister of the governing party to choose which justices will return to the bench and which must be replaced, and with whom. It would also require that judges take religious values into account in their work: "In social life, apart from legal norms there also operates a system of norms and values, undefined in law but equally established, derived from morality and Christian values [...] The supreme court should take this duality into account in its rulings," it reads.

Duda expressed his intent to sign a third bill that would allow the justice minister under some circumstances to select judges and assign cases for Poland's local courts.

Supporters of the laws argued they are needed to eliminate corruption and render the court system more efficient. Deputy Justice Minister Marcin Warchol said the laws would prevent justice from "becom[ing] a form of privilege" and ensure all Poles are subject to the law. Warchol said in an essay, of PiS's legal reforms in general, "If we do not ensure a minimum of democratic control over the judiciary, there will be no counterbalance for the growing corporatism of judges. And that would mean the creation of a new order: a judiciocracy instead of democracy." Since coming to power in 2015 on a populist and anti-immigrant platform, PiS has taken control of Polish public media, limited the authority of the constitutional tribunal, the body that can rule acts of Parliament unconstitutional, and attempted a no-exception anti-abortion law, though plans for this last were cancelled in response to widespread protests. Some of these measures have been passed without any opportunity for public commentary or during nighttime sessions.

"Courts in our opinion are the stronghold of post-communists in Poland," said party leader Jarosław Kaczyński. He went on to accuse the supreme court of "protecting people who had served the old [Communist] regime" and of being "controlled by lefties" and foreign elements.

The Polish Parliament met in Warsaw to vote on the restructuring of the country's Supreme Court.
Image: Marek and Ewa Wojciechowscy.


Mikołaj Pietrzak of the Warsaw Bar Association told the press, "The courts are sometimes too slow, some of the fees payable by citizens are too high, the system of legal aid is inadequate and under-financed — we can see the problems [...] But this is like going to the doctor with the flu and he treats you by amputating your leg."

The protesters numbered in the tens of thousands in Warsaw alone, some of them singing "Highway to Hell" outside the Presidential palace, in reference to Duda's location at the time in his vacation home on the Hel Peninsula. Protests across Poland continued through the weekend, with many holding up signs reading "3 X veto," calling for President Duda not to support the new laws and candlelit vigils on Sunday night.

Some protesters did support the government's decision. When ombudsman Adam Bodnar gave a speech asking the Senate not to pass the bill, spectators called out, "Who elected you? No one! No one!"

University of Warsaw constitutional law expert Marek Chmaj told Gazeta Wyborcza, "The act means the abolishment of the Supreme Court in its current shape, creating a substitute court composed of completely new judges [...] Moreover, a disciplinary chamber is being created to watch the obedience of judges and representatives of legal professions."

The State Department of the United States, one of Poland's NATO allies, issued the following last Friday: "The Polish government has continued to pursue legislation that appears to undermine judicial independence and weaken the rule of law in Poland [...] We urge all sides to ensure that any judicial reform does not violate Poland's constitution or international legal obligations and respects the principles of judicial independence and separation of powers."

The European Union threatened legal proceedings if Poland were to enact this measure, which it sees as a lapse in Poland's treaty obligations to uphold democracy and the rule of law. President of the European Council Donald Tusk, himself a Pole, said, "It is my conviction that they are a negation of European values and standards, and that they put our reputation at risk [...] Politically, they move us back in time and space — backward and to the East." Legal action could result in economic sanctions or a loss of Poland's voting rights, though this last would require a unanimous vote among the E.U.'s other 27 countries, and Prime Minister Viktor Orban of Hungary — one of the 27 — likened the plans for measures against Poland to an "inquisition campaign."

Arrest made as mayor of Gdańsk, Poland stabbe...

"I have decided to send back to parliament — in which case to veto — the law on the supreme ...