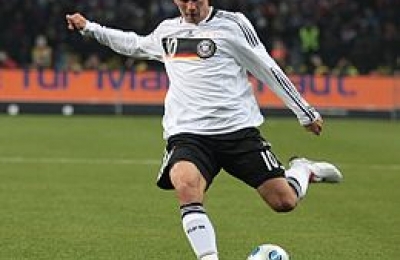 Before the match, Podolski said, "Thank you for thirteen years of having the eagle on the chest. Thank you to everyone. Thank you to my family and my parents. Thank you Dortmund. Thank Köln and thank you Germany!" Podolski immigrated to Germany at the age of two "with basically only a football under my arm", as he put it in August. He earned his 130th international cap on Wednesday. Podolski is Germany's third all time most capped player after Lothar Matthäus and Miroslav Klose and is the third top-scorer for Germany.

Podolski debuted for Die Mannschaft thirteen years ago in 2004. Since then, the forward has made appearance in seven major tournaments, and won the 2014 FIFA World Cup in Brazil. Podolski was the fifth player to retire from Germany's 2014 World Cup squad. Before him, Bastian Schweinsteiger, Philipp Lahm, Miroslav Klose, and Per Mertesacker hung up international boots.