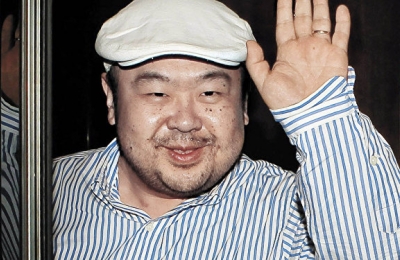 Malaysian authorities on Friday arrested North Korean man Ri Jong Chol, 46, on suspicion of involvement in the murder of Kim Jong Nam, the half-brother to Kim Jong Un, leader of North Korean leader. He died in Malaysia on Monday morning. According to South Korean officials, he was killed by a fast-acting poison administered by two women who approached him in Kuala Lumpur International Airport.

Ri is now the fourth subject in custody. On Wednesday, Malaysian authorities said, they arrested 26-year-old taxi driver Muhammad Farid Bin Jalaluddin, whom they believed was the boyfriend of one of the women who approached Kim Jong Nam in the airport on Monday. Indonesia's Minister of Foreign affairs confirmed one of the women, Siti Aishah, is a Indonesian citizen, but confirmation was not then available on whether her counterpart, whose name was given as Doan Thi Hong, is actually Vietnamese or was merely carrying a Vietnamese passport. Selangor State Police Chief Abdul Samah Mat told CNN Jalaluddin helped the police find Aishah. The two women are to be held for seven days.

In findings published in the New Straits Times, CCTV footage from the airport showed two women, ostensibly Aishah and Hong, walking up to Kim near the self-check-in stand. One of them distracted him while the other grabbed his face or neck and administered the poison, though reports differ as to whether she used a needle, spray or impregnated cloth. Kim Jong Nam fell sick and went to the airport clinic, from which he was sent to hospital by ambulance. He died before reaching the hospital. One of the two women was wearing a T-shirt reading "LOL" when she approached Kim. Aishah allegedly told police she thought she had been hired to perform a prank for a television show and that she had been hired to spray people with liquid before.

Kim had been travelling under the alias Kim Chol and was returning to Macau where he has lived with his family since leaving North Korea.

Kim Jong Nam, 45, was the oldest son of North Korean leader Kim Jong Il. His mother was Kim Jong Il's mistress Song Hye Rim and he was raised separately from his half-brothers. He was considered the elder Kim's heir apparent but lost favor after an incident in 2001 when he used a fake passport in an attempt to visit Japan. Kim has lived outside of North Korea for many years and did not attend his father's funeral in 2011. He favored more economic reform for North Korea and once told Japanese writer Yoji Gomi he did not believe Kim Jong Un would be a good leader:

South Korea's national intelligence agency accused the North Korean government of having Kim killed. The Korean Institute for Defense Analyses's Kim Chang-su stated Kim Jong Un may have felt his brother was a threat to his position. In the years since Kim Jong Un became leader, many people so perceived, including his uncle and advisor Jang Song Thaek, have ended up dead. Jang was executed for treason. Malaysian Deputy Prime Minister Ahmad Zahid Hamidi dismissed allegations North Korea arranged Kim's death as "only speculation."

Malaysian police yesterday reported an attempted break-in at the morgue where the body of K...
Send us your articles and web-novels! comments powered by Disqus

Trump says he may put US into state of emergency to ...

United States Related articles January 7, 2019: Trump says he may put US into state of eme...