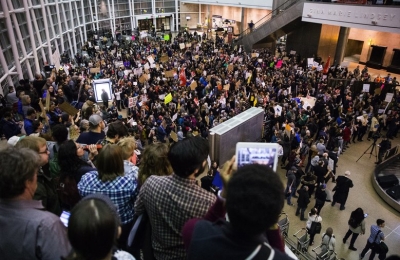 At 9:00 p.m. U.S. east coast time yesterday (0200 today UTC), a U.S. federal judge in Brooklyn issued an emergency ruling halting deportation of individuals from the U.S. under the ban on individuals from seven majority-Muslim countries entering the United States that president Donald Trump had initiated by executive order on Friday. Another judge in Virginia issued a similar ruling shortly afterwards.

The American Civil Liberties Union filed suit on behalf of two Iraqis who had been detained at John F. Kennedy airport in New York. Judge Ann Donnelly granted the emergency request to halt deportation under the executive order on grounds some of the people who would be deported would face "imminent danger" and "irreparable injury."

"What I do for this country? They put the cuffs on" said Hameed Khalid Darweesh, who had worked as a translator for the U.S. military for more than ten years and had been issued a visa after extensive background checks. "You know how many soldiers I touch by this hand?"

Earlier yesterday, Trump issued a statement that his executive order was being carried out smoothly: "It's not a Muslim ban, but we were totally prepared[.] It's working out very nicely. You see it at the airports, you see it all over." The New York Times described the effects of the ban as "upheaval", and The Verge described them as "widespread confusion."

Customs agents at John F. Kennedy Airport in New York detained about twelve people. Others were prevented from boarding planes bound for the U.S. This included both individuals coming to the U.S. for the first time and those in possession of a green card as proof of legal residency, such as international students returning for the spring semester and legal residents returning from visits to their home countries. According to Homeland Security, 109 people were in transit when the order was issued and were prevented from entering the U.S. upon arrival and 173 were prevented from boarding planes, of which 81 were later given waivers admitting them to the country.

The stay applies to individuals who are already in the United States and those who are currently travelling to the United States under legal visas but does not clearly apply to anyone who has not yet departed for the U.S. While it prevents these people from being deported, it does not specifically allow them to enter the United States either. It is not clear whether they will be allowed to do so or held in detention.

Trump's executive order, officially titled "Protecting the Nation from Foreign Terrorist Entry into the United States", specifically placed a 90-day halt on immigration from seven Muslim-majority countries, Iran, Iraq, Syria, Yemen, Sudan, Libya and Somalia; suspended all refugee admissions for 120 days; and suspended all entry of Syrian refugees into the United States without time limit. Although the administration issued a statement indicating the measure was meant to target "countries compromised by terrorism", National Public Radio's Greg Myre remarked it has been more than twenty years since the last time any of the targeted countries was the origin for a fatal Muslim extremist attack in the U.S. The executive order did not apply to any of the countries from which recent such attackers have hailed, such as Saudi Arabia and Egypt which were home to many of the 9/11 hijackers.

NPR noted the seven countries named in the executive order are places where Trump's family has "no business interests", whereas Trump's family is conducting or planning projects in Saudi Arabia, Azerbaijan, Dubai, Indonesia and Turkey. Former Obama administration ethics advisor and current fellow at the Brookings Institution Norman Eisen called the decision an "open and notorious violation of the Constitution".

The official government of Yemen issued a statement on Wednesday requesting a re-evaluation...

Bioglow, a company based in St Louis, Missouri, USA have bioengineered the world's first gl...
Send us your articles and web-novels! comments powered by Disqus