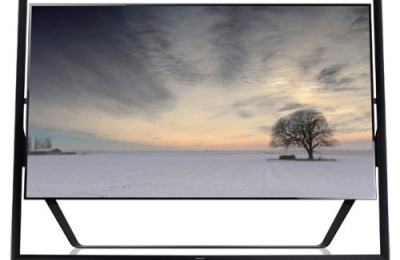 According to the official specifications, the “S9 4K Ultra HD TV” boasts four times the resolution, and precision-black backlight technology, providing you with new levels of enjoyment from watching your favourite movies and TV-shows.

Some of the other features include a Smart Touch Remote, Internet connectivity with built-in Wi-Fi and a Quad-Core processor.

This TV may be very attractive even if you can't afford it, however the specifications and high price tag are not the only shocking things about it. Amazon.com has over 1000 product reviews and is worth your time to read through a few of them.

Here is a few of our favourite reviews:

By Jordan Rivera
I was going to fund my daughters wedding in Hawaii, but I figured this Samsung TV would last much longer.


By Brendan J. Smith
Just cashed in the kids' college funds and dropped them off at the Army recruiting station. I got the TV, they got a career. I think it worked out well for everyone.


By Randomguy
My friend pays a lot of money in child support. I convinced him that child support was a waste of time and he agreed. To repay me for helping him realize he was dumping money into a bottomless pit, he took out a second mortgage to buy me this dream television. The television is worth every penny and his kids will be just fine in public school.


By James O. Thach
My wife and I bought this after selling our daughter Amanda into white slavery. We actually got a refurbished. It's missing the remote, but oh well-- for $10K off, I can afford a universal, right? The picture is amazing. I've never seen the world with such clarity.

Amanda, if you're reading this, hang in there, honey! We'll see you in a year.

I just wanted to add an addendum to my review. Since posting it, we have received a flood of responses. People have said some pretty hurtful things--even questioning our values. Let me assure you, this was not an easy decision to make, and we made it as a family. Obviously, it's very personal. But in light of all the second-guessing, I wanted to explain our thinking.

Some of you may think I'm avoiding the "elephant in the room"-the real reason why this was such a heart-wrenching choice. So let's just get it out there. Yes, the 120Hz refresh rate is a disappointment, especially on a 4K. But life is full of compromises. And frankly, we hardly notice. All in all, no regrets.

P.S., as for our daughter, NO ONE has the right to question our parenting. Totally out of bounds. Amanda was going into 7th grade, so it was going to be a transitional year anyway. Now she gets to see the world. How many kids her age get to go to Bahrain? I sure as heck didn't, but you don't hear me screaming "child abuse." Bottom line: MYOB! Seriously.

Has it been a year already? Wow! I guess that's what 8 hours a day of immersive TV will do for you! Many of you have expressed your eagerness for an update. Well, here goes.

Generally, the Samsung has held up beautifully. We have noticed a little bit of lag, mostly in multi-player gaming--but not enough to cost us any firefights. There have been some issues up-imaging low rez content, but that's to be expected when you early-adopt--we're still "waiting on the world to change," as John Mayer would say (gosh he's talented.) On the plus side, we feel like we are now officially part of the cast of GOT. The other night Peg almost had to open a window to let Daenerys' dragons fly out!

And you'll all be happy to know our darling Amanda is back with us, safe and sound. She has changed a little. She's less talkative than before (though she had some choice words for me when I asked her to clean her room). And she's started wearing eye make-up, which has Peg a bit concerned. But welcome to thirteen, I guess. We're just glad to have her home. And she loves the TV. That's the main thing. In fact, she spends so much time in front of it lately, you'd swear she owns it.
Share this article:

Global car brands promote their products via numerous commercials, some of which are so sca...
Send us your articles and web-novels! comments powered by Disqus

On Wednesday, George Djorgovski and collaborators reported in the journal Nature on an unusu...

Futurama, gone, but not forgotten

In September 2013, Futurama came to a halt after the show was canceled by Comedy Central in ...