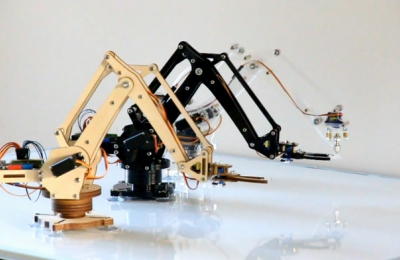 Have you ever wanted to run your own factory?

uArm is an 4-axis parallel-mechanism, Arduino powered robotic arm developed by uFactory and funded on KickStarter.

uArm cannot really be compared with an industrial robotic arm, but it can be a lot of fun, use it to hold a light over your desk, pass you a pen, write down your documents, play against you at chess and even assemble or disassemble items of your choice; the possibilities are only limited by your imagination.

The robotic arm is controlled through a Windows application, however Android and iOS apps are currently under development. The arm comes in either acrylic or wood with a gripper for around $185 in a DIY kit. Optionally if you want it pre-built, you can buy it for $279.

uFactory have said that the design is inspired by the industrial-strength ABB PalletPack robot arm and it is strong enough to lift up and relocate a full can of soda.

The campaign is to be completed in May and the project will be released open-sourced with the design files and software.

Turn your desk into a mini factory

Have you ever wanted to run your own factory? uArm is an 4-axis parallel-mechanism, Ardui...

John Boehner re-elected as US House Speaker despite ...

Maisha Najeeb, a 10-year-old girl whose brain was "accidentally" injected with GLUE will rec...

During their deliberations, the jury asked to review the testimony of alleged victim Andrea ...