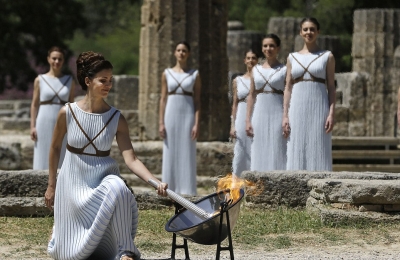 A little over 100 days before the scheduled start of the 2016 Summer Olympics, on Thursday the Olympic flame was ignited in a ceremony at the temple of Hera in Olympia, Greece. Actress Katerina Lehu played the role of priestess accompanied by fourteen virgins, lighting the flame at solar noon using sunlight focused by a parabolic mirror.

After lighting the "sacred fire" Lehu passed it to its first bearer, gymnast Lefteris Petrunias. According to El País, another torch-bearer is to be a Syrian refugee, bearing it in the Eleonas refugee camp.

International Olympic Committee president Thomas Bach said the lighting ceremony was writing history, and the Olympic Games would bring a message of hope in difficult times to Brazil and to the whole world. Over six days, the Olympic torch is to pass through more than 2000 {kilometres of Greek territory, going through Marathon and the island of Corfu. This part of the ride ends at the Panathinaiko Stadium in Athens, site of the first modern Games of the Olympiad.

Subsequently, the flame travels by plane to the Olympic Museum in Lausanne where it is to stay for a week. Later, on May 2, it is to be moved to Brasilia. The relay trip of the Olympic flame from Olympia to the Olympic site was introduced by Carl Diem in the Berlin 1936 Games.

A little over 100 days before the scheduled start of the 2016 Summer Olympics, on Thursday t...

The missile was fired from a submarine off North Korea's east coast near Sinpo, officials sa...