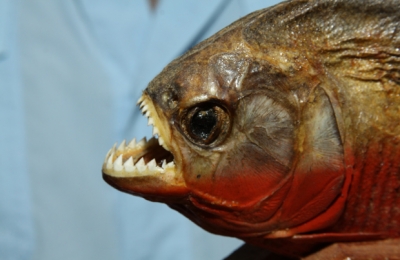 Piranhas have always been in the spotlight for the danger they apparently pose to humans.

Movies depicting Piranhas mutilating humans have also increased in recent years, but what is the real truth about these ferocious fish?

Specialists have on numerous occasions been asked to show evidence of their danger to humans, but have struggled to show even a dozen cases in the past half-century that involve fatal injuries.

Piranhas have a survival instinct and will use their razor teeth to bite and maul on their target; in the most cases of injuries, the fish were merely defending themselves.

Jan H. Mol of the University of Surinam has stated that he believes the piranha threat is wildly exaggerated. He has spent more than 20 years wading in South American rivers and without ever being injured by free-swimming piranhas.

So if you ever find yourself in a river of Piranhas, do not panic; the Piranhas are most likely to swim in the opposite direction and even in the worse case scenario, if they are extremely hungry, you may find yourself being bitten on the legs and any exposed skin, but this is a very rare occurrence.

Just like any wild animal in nature and under extreme conditions, they can become a danger to humans.
Share this article:

Sometimes it can be really difficult to find useful apps on the Android Market due to all o...
Send us your articles and web-novels! comments powered by Disqus

The truth about Piranhas

Piranhas have always been in the spotlight for the danger they apparently pose to humans. ...

Wynnum defeat Maroochydore in round 4 of Australia's...