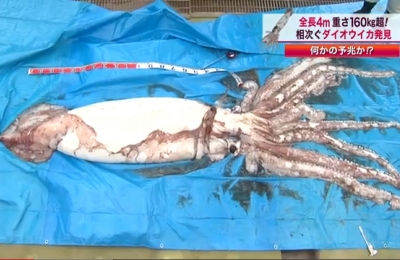 A giant squid was found in the fishing net of fisherman Shigenori Goto just off the coast of Sadogashima island.

Unfortunately, the squid died after it was brought to the surface.

The male squid had reached a size of 4 meters and weighed around 160kg.

Giant squids are rarely seen because of the depths at which they live. The giant squid was taken to the local government marine research institute in Niigata to be studied.
Share this article:

Spielberg's Plan for Ghost in the Shell Live-...

After few years of Hollywood's stalled plan for a live action remake of Japanese anime and ...

The producer of Titanfall has stated Titanfall is "really tough to market". Titanfall is a ...
Send us your articles and web-novels! comments powered by Disqus

The €1.5million campaign features videos on social media to target the 16–35 age demographic...

Time said of Mohamed in announcing the news: "Not many people make national news by bringing...

MV Suilven, a ferry in service in Fiji, capsized and sank in Suva Harbour today. Around thi...