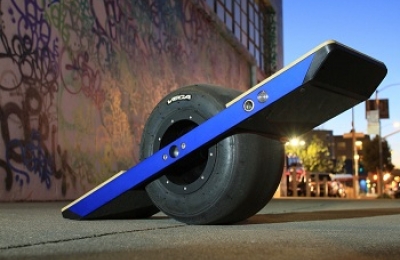 What looks like an awkward wheel placed within a wooden frame is actually a self-balancing skateboard that works much like how a Segway would, save for the fact you don't have handlebars. While operating this device can hardly be called "skating," it does give you the sensation of being on an actual skateboard and delivers a very smooth ride once you get used to it, according to the folks at Engadget who tried it out.

Doerksen brought the skateboard concept to Engadget's trailer on Friday last week. According to them, despite its coarse appearance, it certainly had the makings of something durable and comfortable.

After seeing this, I dare to ask: How can I carry a skateboard like this around conveniently? It's not flat, and that big rubber wheel makes the whole package a bit unattractive no matter how I try to rationalize its repulsiveness. I say we work on hoverboards! We only have one year left to catch up with those colorful little devices in Back to The Future Part II. Don't tell me that a torn-off car axle is the best we can do.
Share this article:

Driving down a highway at night can be great, it is very relaxing, but sometimes those road...

Meet Didga, a feline with a taste of life in the fast lane; happily cruising around Coolang...

It has been reported that Alienware is planning to release its third-party Steam Machine in...
Send us your articles and web-novels! comments powered by Disqus

The attack started with the three individuals shooting weapons near the terminal entrance. A...