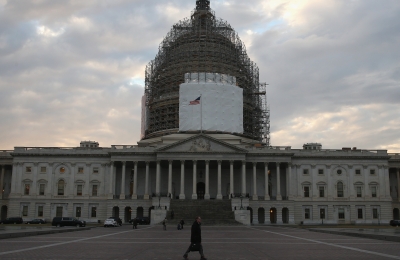 In Washington D.C., the U.S. Capitol building has reopened after shots were fired in front of it. For safety, no entry or exit was permitted from the building after a man committed suicide just before 2pm local time yesterday. The lockdown lasted until around 3:50pm while members of the bomb squad investigated the man's backpack, suitcase, and the surrounding area.

A witness estimated 60 other persons were in the area at the time of death. Witnesses reported the man had a sign of protest about taxation and social justice.

The shooting occurred during the annual Cherry Blossom Festival, a busy Washington tourist season. Congress was not in session during the attack but are returning from recess tomorrow.

Twelve dead in shooting at offices of French ...

At least twelve people have been killed today in a shooting at the Paris offices of the sat...
Send us your articles and web-novels! comments powered by Disqus

US Capitol lockdown lifted after shooting

In Washington D.C., the U.S. Capitol building has reopened after shots were fired in front o...