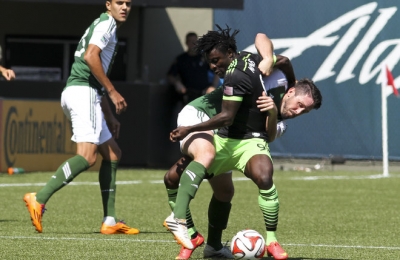 T2 struck first when defender Harrison Delbridge headed the ball in from a free kick in the 30th minute. Seattle responded with Pablo Rossi converting a penalty kick early in the second half and Giuliano Frano tapping a lobbed pass into the net in the 88th minute. Final score, 2–1 Seattle.

In the 30th minute, T2 midfielder Blair Gavin placed the ball nicely for Delbridge who connected cleanly with the ball to head it past S2 goalkeeper Charlie Lyon. At half, the game still stood with Portland in the lead 1–0. In the first minutes of the second half, S2 Andy Craven was pulled down in the penalty box by T2 Andy Thoma. Rossi was able to convert the penalty with a strong strike to the top left corner. T2 keeper Jake Gleeson was unable to stop the shot. Frano's goal came in the 88th minute as he was able to chip the ball into the net after nice build up play by the Sounders. The Timbers did look dangerous on corners having earned 8 to Seattle's 3.

The Timbers suffered their first loss of their season while the Sounders experienced their first ever comeback victory. This was also the first match between the two Cascadia rivals. T2 now stand at 7 points with a record of 2–1–1. S2 and Arizona United SC are now the only Western Conference teams still undefeated. Portland next faces defending champions Sacramento Republic FC away on Saturday, April 18 while Seattle hits the road to battle Tulsa Roughnecks FC on Thursday, April 16.

Take a look at the 5 famous captains from the Star Trek series', then and now!

On Friday a car bomb, claimed by Islamic State of Iraq and Syria (ISIS), killed by varying r...

An announcement has stated a new processor that is destined for mobile devices will offer be...