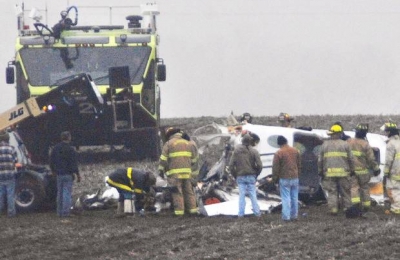 A Cessna 414 twin engine aircraft crashed in an Illinois field on Tuesday while returning from an Indianapolis NCAA basketball tournament. All seven people on the plane were killed.

The plane took off from an airport in Indianapolis. It crashed very early Tuesday morning. According to the McLean County sheriff, rescuers found all seven people dead. Coroner Kathleen Davis said they were killed by blunt force trauma.

A National Transportation Safety Board (NTSB) investigator said he didn't know yet why the plane turned away from its approach to a runway in Bloomington, Illinois, though he noted conditions of rain and fog. The NTSB is investigating the crash.

A Cessna 414 twin engine aircraft crashed in an Illinois field on Tuesday while returning fr...

A study published last Thursday in The Lancet found the rVSV-ZEVOB ebola vaccine can provide...