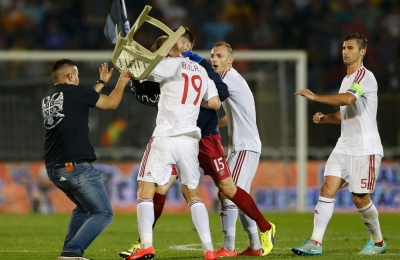 The UEFA Euro 2016 qualification match between Montenegro and Russia on Friday was abandoned after players and coaching staff got involved in a brawl. The match, at Montenegro capital Podgorica Gradski Stadion, was suspended within the first minute after the Russian goalkeeper was hit with a flare. The match restarted after a delay but was called off around the 66th minute when a brawl started.

The flare, thrown from the crowd, hit 28-year-old Russian goalkeeper Igor Akinfeev on the back of the head less than 30 seconds after the game had started. The game was suspended and play delayed for 35 minutes after the incident. Akinfeev was substituted with Yuri Lodygin coming on in his place. Akinfeev, who plays his domestic football for CSKA Moscow, suffered a neck injury and minor burns and was taken to a Podgorica hospital.

Disturbances caused a further 18-minute delay in starting the second half. Play resumed and Russia were awarded a penalty on the 66th minute. Roman Shirokov saw his penalty saved by Vukasin Poleksic and the score remained 0–0. In the moments after the penalty players and officials from both teams started a brawl on the pitch. The players were led off the pitch, and the crowd was told the game had been called off.

Montenegrin Football Association general secretary Momir Djurdjevac gave his reaction the the events. He said to Reuters, "These fans sing 'Montenegro we love you' but throw flares, insult rivals and cause all sorts of incidents every time they turn up and that's outright hypocrisy[...] We have left the impression of barbarians and this is a complete disaster. It seems we don't deserve to have a nation, a football team or a berth in a major tournament. As far as I am concerned the game should not have continued after the first-minute incident. We can only thank God that no one was seriously hurt".

He also spoke about his fear of the repercussions it could have on Montenegro's hopes to qualify for Euro 2016. He said "We will in all likelihood pay a hefty fine and say goodbye to a major tournament but what scares me is that this can happen again."

Russia and Montenegro are competing in Group G of the qualification process. They are in the group alongside Sweden, Austria, Moldova, and Liechtenstein.

The UEFA Euro 2016 qualification match between Montenegro and Russia on Friday was abandoned...