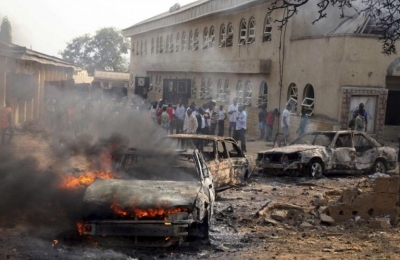 Military forces from Chad and Niger yesterday engaged Boko Haram militants within the borders of Nigeria. This follows African Union endorsement on Friday of the creation of an 8000-plus strong regional force to combat the threat posed by the militant group.

Along with Cameroon, both Chad and Niger have previously engaged Boko Haram forces who have crossed their borders from the territory they hold in northern Nigeria. While all three countries have previously aided Nigeria against Boko Haram, the new attacks are Niger's first push into foreign territory.

The new attacks against Boko Haram follow its leader pledging allegiance on Saturday to Islamic State, as other groups have done. A Nigerian military spokesman, speaking to the BBC, dismissed this as a "plea for help"; Nigerian spokesmen cited recent military defeats inflicted upon Boko Haram as the reason for the militants' announcement.

A video purporting to show the execution of 21 Coptic Christians by supporters of Islamic S...
Send us your articles and web-novels! comments powered by Disqus

Xu Caihou, a former Chinese general who was once the second in command within the People's L...

Sri Lanka to investigate alleged coup attempt by out...

The government of Sri Lanka are to investigate claims of an alleged coup by the outgoing pre...

Australian Opposition Leader pledges to save Great B...

Recent surveys indicated coral bleaching has killed more than a third of coral in the Great ...