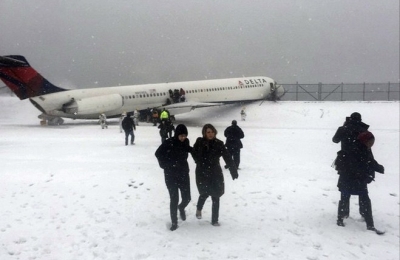 A Delta Air Lines passenger jet skidded off the runway at New York City's LaGuardia Airport in snowy weather on Thursday, causing a shutdown of the airport, according to officials. The jetliner was carrying 127 passengers and five crew.

The MD-88, operating as flight 1086, was flying in from Atlanta when it lost control after landing. There were a few minor injuries while the passengers were evacuated. The plane was significantly damaged and the airport was shut down. One of the runways reopened around 2 p.m., although an earlier Federal Aviation Administration statement had put reopening at 6:59 p.m.

The city fire department said five out of at least 28 passengers with minor injuries were hospitalized.

Pat Foye, executive director of the port authority, said the plane was two thirds of the way along the 7,000-foot runway when it began a leftward skid that nearly sent it into the water.

The National Transportation Safety Board sent an investigator for the flight data recorders. Delta stated they would work with authorities to investigate.

A small jet has crashed in Gaithersburg, Maryland near Montgomery County Airpark yesterday ...

A Cessna 414 twin engine aircraft crashed in an Illinois field on Tuesday while returning f...
Send us your articles and web-novels! comments powered by Disqus

Five people, including two Europeans, have been killed by gunmen during an attack on a bar i...

Yesterday, former Indian president APJ Abdul Kalam died at the age of 83 after collapsing at...