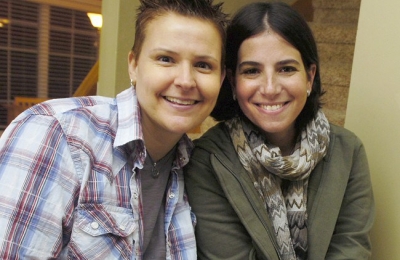 Niki Quasney, who together with wife Amy Sandler became the first married gay couple in Indiana, died of cancer on Thursday. She was 38.

Indiana, US had only recognised their marriage last year after a federal judge granted their emergency request. They wed in 2013 in Massachusetts, two years after an Illinois civil union.

Quasney was diagnosed with ovarian cancer in 2009 and sought the intervention to ensure eligibility for her daughters and wife to receive state and national assistance after her death. Also sought was a death certificate recognising her marriage.

The same judge ultimately struck down the state gay marriage ban. An appeals court in Chicago upheld the decision, as did the national Supreme Court. The case was one of a national slew following an earlier Supreme Court ruling in favor of gay marriage.

"If my life is cut short because of ovarian cancer," Quasney told one court "I want our children to know that their parents were treated like other married couples in their home state, and to be proud of this. I want to know what it feels like to be a legally recognized family in our community, together with Amy and our daughters." Their lawyer Paul Castillo said today the couple "knew that by coming forward they could help accelerate equality for all same-sex couples in Indiana by demonstrating the urgency of their need for equal dignity."

James Best, best known as Sheriff Rosco P. Coltrane on The Dukes of Hazzard, has died, aged...
Send us your articles and web-novels! comments powered by Disqus

Niki Quasney, who together with wife Amy Sandler became the first married gay couple in Indi...