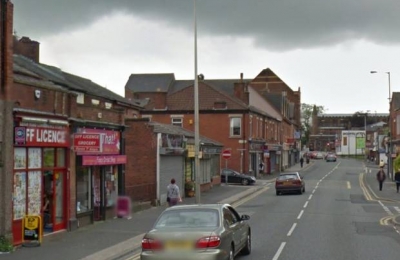 Police were alerted to the collision between the truck and the 82-year-old woman, in the town of Leigh, at approximately 1145 UTC on Wednesday. The woman died at the scene, in what one nearby resident called "a horrible thing to have happened". Witnesses subsequently told police a man stole the victim's purse in the aftermath of the crash.

"This is one of the most disgusting crimes I have ever investigated and I find it hard to believe someone could stoop so low to commit such a horrific offence," said detective Sergeant Neil Lawless. "This man has taken what he sees as an easy opportunity by stealing a purse from a dying woman. I am sure the community will be equally disgusted and I appeal to anyone who may have seen this man take the purse and walk off on Leigh Road. There are a number of rumours circulating on social media at the moment but I would like to reassure residents we are doing all we can to find out who is responsible." Meanwhile, website Wigan Today has claimed witnesses and an unnamed Greater Manchester Police source informed it some nearby pedestrians took pictures of her body following the crash, although the official police statement does not directly address these claims.

Sergeant Lawless has asked members of the public to contact police with any information that may be relevant to the investigation. Greater Manchester Police describe the thief as white, of medium build, aged between 30 and 40, and six feet in height. The police force say he "had a dark brown beard, [and] wore a light grey hooded top with the hood pulled over his head, light blue jeans and black boot style training shoes."

Anyone with any information about this incident is asked to contact:
Greater Manchester Police: 101

A Cessna 414 twin engine aircraft crashed in an Illinois field on Tuesday while returning f...

A small plane, piloted by sixteen-year-old Ryan McCall, crashed near Orange County Airport ...
Send us your articles and web-novels! comments powered by Disqus

Police were alerted to the collision between the truck and the 82-year-old woman, in the tow...

A little over 100 days before the scheduled start of the 2016 Summer Olympics, on Thursday t...

The death toll from Wednesday's plane crash in Taipei, Taiwan reached 40 today with the reco...

The Lindt cafe in Sydney, Australia reopened on Friday, after a siege at the cafe three mont...