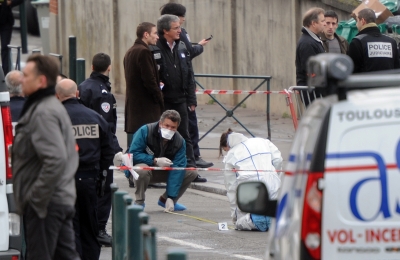 At least twelve people have been killed today in a shooting at the Paris offices of the satirical weekly French magazine Charlie Hebdo. Three men in hoods armed with Kalashnikov rifles entered the magazine's office in the 11th arrondissement and shot dead ten journalists and two police officers before making a getaway in a car driven by a fourth collaborator. Five people have been seriously injured in the attack. A member of the police said after leaving the scene the attackers drove to the northeastern suburbs of Paris where they abandoned their vehicle and hijacked another car.

French police union Unité spokesman Rocco Contento said of the crime scene, "it was a real butchery". The French Government have raised the country's security level to the maximum. President François Hollande told reporters: "This is a terrorist attack, there is no doubt about it".

The French news website 20minutes.fr is reporting one eyewitness claimed that as the attackers approached the magazine's office, they shouted: "you say to the media that it is al-Qaeda in Yemen"((fr)).

Gerard Biard, the editor-in-chief of Charlie Hebdo, stated: "I don't understand how people can attack a newspaper with heavy weapons. A newspaper is not a weapon of war." The magazine recently posted a cartoon on Twitter depicting Abu Bakr al-Baghdadi, a leader of the Islamic State terrorist group.

In 2006, Charlie Hebdo ran the cartoons depicting Muhammad that originally appeared in the Danish newspaper Jyllands-Posten. In 2011, it published another cartoon depiction of Muhammed subtitled "Charia Hebdo", a pun on sharia. The magazine's office was subsequently firebombed. Following the bombing, the magazine's website was hacked and death threats were made against their staff. The magazine responded by publishing on their front page an image showing both the remains of the magazine's offices and one of their cartoonists kissing a bearded Muslim man. The cover contained the headline "Love is stronger than hate"((fr)).

The official government of Yemen issued a statement on Wednesday requesting a re-evaluation...
Send us your articles and web-novels! comments powered by Disqus

Twelve dead in shooting at offices of French satiric...

At least twelve people have been killed today in a shooting at the Paris offices of the sati...

The club was hosting an album launch party which attracted hundreds of attendees at the time...

Australian treasurer Joe Hockey has agreed to reconsider the Goods and Services Tax (GST) on...