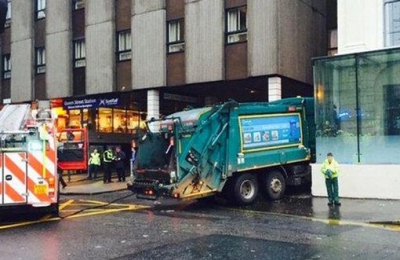 Several fatalities are thought to have resulted this afternoon from a bin lorry crashing in the centre of Glasgow, Scotland.

The accident occurred at about 1430 UTC today, when the vehicle hit multiple pedestrians on Queen Street, then crashed into Millennium Hotel alongside George Square, located in the city centre. BBC Scotland reporter Laura Bicker reported witness accounts the vehicle "careered out of control" and the driver "slumped over the wheel" when the crash occurred.

It is not yet clear how many people have been killed or injured, although Police Scotland have reported "a number of fatalities and people injured", with "all casualties, including the driver of the bin lorry", alternately being taken to Southern General Hospital, Western Infirmary and Glasgow Royal Infirmary. Police Superintendent Stewart Carle said at least seven people suffered serious injury, although the total number of those injured may be greater than this. Sky News has reported six fatalities and a larger number of people injured.

Superintendent Carle further explained that police will investigate what the force has described as a "major incident" for the rest of the day and overnight, although they do not suspect there was any "sinister" activity behind it.

Tags:
Send us your articles and web-novels! comments powered by Disqus

Several fatalities are thought to have resulted this afternoon from a bin lorry crashing in ...

U.S. Senator Bernie Sanders of Vermont, an independent who caucuses with Democrats, revealed...