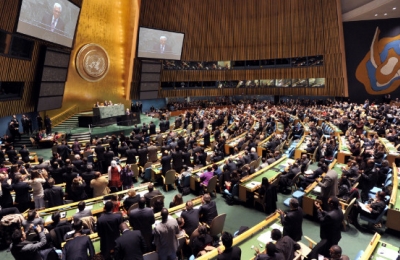 On Monday, the Palestinian National Authority (PA) was granted the status of an Observer State in the International Criminal Court (ICC) in The Hague. This decision promotes the PA toward permanent membership in the court, and helps establish the PA's status in the international arena.

The ICC is an independent organization, in which 122 states are members. The organization operates under the Rome Statute, and is not part of the United Nations (UN) as such. The observer status is a further promotion in the international community's approach toward the PA. Palestinian Ambassador to the UN Riyad Mansour said that now, Palestinian President Mahmoud Abbas needs to decide when to apply to be accepted as a full member.

Human Rights Watch international justice counsel Balkees Jarrah told the Associated Press his organization called on the Palestinians "to join the court which could open up the prospect of justice for serious crimes by all sides".

This is another step for the PA toward exercising its threats to sue Israel for committing war crimes in its territory, following the armed conflict between the two sides in Gaza last summer. PA Foreign Minister Riyad al-Maliki said there was "no other option" given the large numbers of civilian casualties.

This step was taken despite Israel's warnings to Palestinian President Mahmoud Abbas, backed by the US, not to apply for full membership in the ICC. Israelis have objected that move could lead to pressuring Israel during future negotiations, using the threat of a war crimes suit.

In November 2012, the Palestinian Authority was accepted as an observing state without the right to vote in the UN, in a sweeping vote of the general assembly. Subsequently, during the last few weeks, several European parliaments voted in favor of acknowledgement of a Palestinian state. Similarly to the vote in Hague last Monday, these votes are symbolic gestures.

With a majority of 339 supporters against 151 opposers, France's lower house of Parliament ...
Send us your articles and web-novels! comments powered by Disqus

On Monday, the Palestinian National Authority (PA) was granted the status of an Observer Sta...

A gallery of our top 5 most anticipated PC games for 2014. Let us know which PC games...

Always Evolving Racing, a racing team founded by Roger Rodas has been in a seemingly state o...