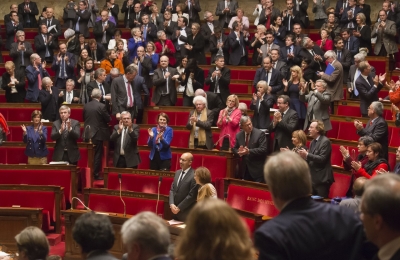 With a majority of 339 supporters against 151 opposers, France's lower house of Parliament voted yesterday for French recognition of a Palestinian State.

The non-binding vote calls on the French government “to recognize the state of Palestine in view of reaching a definitive settlement to the conflict“.

French MP Élisabeth Guigou, who drafted the motion, said this was "a message of peace and friendship addressed to the two peoples, Israeli and Palestinian".

The French government supports the establishment and official recognition of a Palestinian state, but only after peace negotiations between Israel and Palestine are reinitiated.

A week before the vote, French foreign minister Laurent Fabius said his country was willing to host an international conference to promote the negotiations "for the definitive resolution of the conflict".

Twelve dead in shooting at offices of French ...

At least twelve people have been killed today in a shooting at the Paris offices of the sat...

On Monday, the Palestinian National Authority (PA) was granted the status of an Observer St...
Send us your articles and web-novels! comments powered by Disqus

Naked statues of Donald Trump appear in various US c...

A number of statues depicting US presidential candidate Donald Trump without his clothes on ...