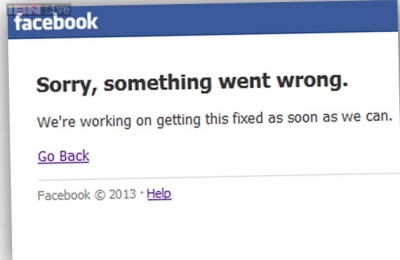 Today, Facebook has suffered the longest outage in history, with many countries around the world affected by the issue.

On opening facebook.com the error message "Sorry, something went wrong. We're working on getting this fixed as soon as we can.".

The outage lasted for approximately 20 minutes!

Mark Zuckerberg has been famously quoted stating Facebook will never go down, and will never crash, countless posts on twitter from around the world seem to say otherwise.

Seeing how the Facebook outage has affected people around the globe, is this a preview of the world without Facebook? Can people cope without the massive social network? What would it be like without Facebook, Google+, Twitter and numerous other social websites?

Has the Bieber hate gone too far?

For the past several years, Justin Bieber has been often under fire from the public, some g...

Ransomware attack hits over 200 US companies,...

A Cessna 414 twin engine aircraft crashed in an Illinois field on Tuesday while returning f...
Send us your articles and web-novels! comments powered by Disqus

Today, Facebook has suffered the longest outage in history, with many countries around the w...

Jurors in the US federal criminal trial of Dzhokhar Tsarnaev found him guilty yesterday of a...

According to a study published on Monday in the Proceedings of the National Academy of Scien...